I think I’ve read everything Agatha Christie ever wrote, but my favorite Christie mystery is Sleeping Murder, probably because the catalyst to the action is a quote from The Duchess of Malfi, a super-dark Jacobean drama that I love.

In Sleeping Murder, Gwendolyn, a young newlywed, buys a house on the south coast of England. She does some remodeling and has a very specific vision for the nursery wallpaper. When workmen open a long-sealed wall, she sees the exact wallpaper she envisioned. Then they discover that there used to be a door in a place where she wants to put a doorway between two rooms. Weird! Gwen goes to London for a visit with relatives, including the indomitable Christie sleuth, Miss Jane Marple. They attend a production of  The Duchess of Malfi, and when Gwendolyn hears the line “Cover her face; mine eyes dazzle; she died young,” she screams and faints; she saw an image of herself viewing a man saying those words as he strangled a blonde-haired woman named Helen.

Is Gwen losing her mind? Is there paranormal activity? Or is the house familiar for a reason? I’m not telling. You’ll have to read this masterful mystery to find out.

Plantation Shudders is the first book in my Cajun Country Mystery series. I transferred to Tulane University in the middle of my sophomore year and fell in love with south Louisiana. I’m also a big architecture buff and fascinated by the old plantation homes in the area. Those obsessions came together to inspire the series.

In Plantation Shudders, Magnolia Marie “Maggie” Crozat, a feisty artist in her early thirties, leaves New York and moves back to her hometown, eccentric Pelican, Louisiana (town motto: “Yes, We Peli-Can!”), to work at her family’s historic plantation-turned-B&B.  The business is in peril after an obnoxious eightysomething couple staying at the B&B on their honeymoon – yes, their honeymoon – mysteriously drops dead within minutes of each other.  Rufus Durand, the lazy Pelican Chief of Police, carries a longstanding grudge against the Crozats, so he’s no help in the investigation.  And she can’t trust the sexy new detective in town, Bo Durand, because he happens to be Rufus’s cousin. So Maggie Crozat is forced to become an amateur sleuth, aided by her accordion-playing best friend Gaynell, her cross-dressing pal JJ, and her cocktail-loving Grandmere. Laissez les bon temps rouler! 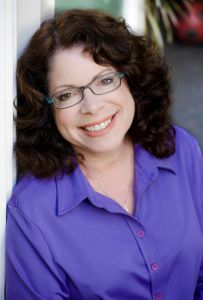 Ellen Byron authors the Cajun Country Mystery series. A Cajun Christmas Killing and Body on the Bayou both won the Lefty Award for Best Humorous Mystery and were nominated for Agatha awards in the category of Best Contemporary Novel. Plantation Shudders, was nominated for Agatha, Lefty, and Daphne awards. Mardi Gras Murder is available for presale. Ellen’s TV credits include Wings, Just Shoot Me, and Fairly OddParents. She’s written over 200 national magazine articles, and her published plays include the award-winning Graceland. Ellen is a proud founding blogger of Chicksonthe case.com. She also worked as a cater-waiter for the legendary Martha Stewart, a credit she never tires of sharing. For more information, please visit www.ellenbyron.com.