I READ: The Cold, Cold Ground by Adrian McKinty 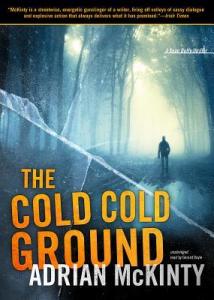 Sean Duffy, a Royal Irish Constabulary sergeant, is newly stationed to Carrickfergus, Northern Ireland, during “The Troubles.” A Catholic, he defied societal norms by joining the police and then purchasing a council house in a Protestant neighborhood.

Sean’s wit is revealed early.  In the first scene, after poetically describing a night riot, (“Arcs of gasoline fire under the crescent moon. Crimson tracer in mystical parabolas. Phosphorescence from the barrels of plastic bullet guns.”), he observes, “It was perfect. It was Giselle. It was Swan Lake. And yet… And yet we had the feeling that we had seen better.”

Duffy uses humor to establish his position in the male-only force. Amusing his comrades, he wittily retorts in response to one constable’s prejudice. To his superior, he plays the wise-cracking jester. Yet, he is no fool, clearly intelligent, knowledgeable and comfortable with command as he sets about solving a murder mystery.

What I love about Duffy is that he, in his own small way, is affecting a one-man solution to sectarian violence. He never stoops to join the conflict. Instead, he makes friends with Protestants he meets impressing them with his sincerity. 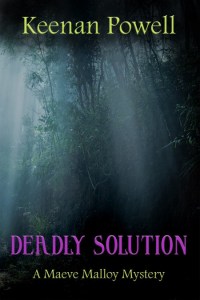 Less than a year after drinking sidelined her career as a public defender in Anchorage, Alaska, Maeve Malloy is asked to defend an Aleut Indian accused of beating another homeless man to death. With no witnesses to the crime and a client who claims to have no knowledge of the night of the murder due to a blackout, the case is stacked against them.

As Maeve works to maintain her sobriety, she and her investigator Tom Sinclair search for answers in homeless camps, roadside bars, and biker gang hangouts. When they uncover more than a few people with motives all their own for wanting the victim dead, they are determined to prove their client’s innocence before he is sentenced to a life behind bars for a crime he swears he didn’t commit. When Maeve and Tom discover there may be a link to an unusually high number of deaths among the homeless community, the search is on for a killer hunting among the most vulnerable members of society.

My first publication were illustrations in Dungeons and Dragons, when still in high school.  Art seemed an impractical pursuit (not an heiress, didn’t have disposition to marry well, hated teaching), so I went to law school instead. Right after graduation, I moved to Alaska.

Earlier in my career, I defended criminal cases, including murder, for several years. I still practice law in Anchorage, Alaska.

In 2009, there was a string of homeless death which the Medical Examiner had ruled were the result of “natural causes.” While attending a seminar, I learned of a little-known law that permits the ME to rule natural causes without autopsy. These deaths and this loophole were the inspiration of my debut, Deadly Solution, published by Level Best Books in 2018.