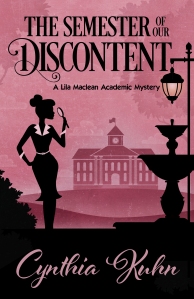 English professor Lila Maclean is thrilled about her new job at prestigious Stonedale University until she finds one of her colleagues dead. She soon learns that everyone, from the chancellor to the detective working the case, believes Lila—or someone she is protecting—may be responsible for the horrific event, so she assigns herself the task of identifying the killer.

More attacks on professors follow, the only connection a curious symbol found at each of the crime scenes. Putting her scholarly skills to the test, Lila gathers evidence, but her search is complicated by an unexpected nemesis, a suspicious investigator, and an ominous secret society. Rather than earning an “A” for effort, she receives a threat featuring the mysterious emblem and must act quickly to avoid failing her assignment…and becoming the next victim.

“The first sentence grabbed me, the ending surprised me and, in between, The Semester of Our Discontent was a box of delights. A pitch-perfect portrayal of academic life with a beguiling cast.” — Catriona McPherson, multi-award-winning author of the Dandy Gilver series and The Child Garden

“It may take place in the world of certificates and tweed suits, but it is sharp.” — Criminal Element 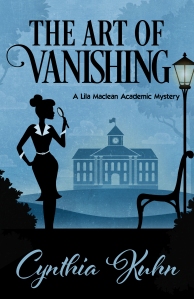 When Professor Lila Maclean is sent to interview celebrated author and notorious cad Damon Von Tussel, he disappears before her very eyes. The English department is thrown into chaos by the news, as Damon is supposed to headline Stonedale University’s upcoming Arts Week.

The chancellor makes it clear that he expects Lila to locate the writer and set events back on track immediately. But someone appears to have a different plan: strange warnings are received, valuable items go missing, and a series of dangerous incidents threaten the lives of Stonedale’s guests. After her beloved mother, who happens to be Damon’s ex, rushes onto campus and into harm’s way, Lila has even more reason to bring the culprit to light before anything—or anyone—else vanishes.

“The Lila Maclean Academic Mystery series should be required reading for anyone who loves a great mystery! Tightly plotted with a deliciously memorable cast of characters, The Art of Vanishing kept me guessing from start to finish, and Kuhn’s smart sense of humor made every page a pleasure.” — Marla Cooper, author of the Kelsey McKenna Destination Wedding Mysteries 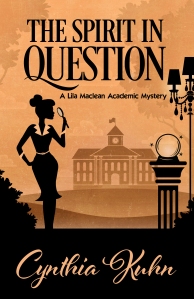 English professor Lila Maclean knew drama would be involved when she agreed to consult on Stonedale University’s production of Puzzled: The Musical. But she didn’t expect to find herself cast into such chaos: the incomprehensible play is a disaster, the crumbling theater appears to be haunted, and, before long, murder takes center stage.

The show must go on—yet as they speed toward opening night, it becomes clear that other members of the company may be targeted as well. Lila searches for answers while contending with a tenacious historical society, an eccentric playwright, an unsettling psychic, an enigmatic apparition, and a paranormal search squad. With all of this in play, will she be able to identify who killed her colleague…or will it soon be curtains for Lila too?

“An A+ academic mystery! This delightful cozy deserves extra credit for its clever protagonist, laugh-out-loud dramatics, and layers of mystery.” — Nora Page, author of the Bookmobile Mysteries 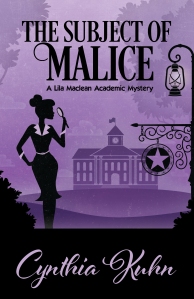 The organizers have rustled up plenty of surprises for the literary conference at Tattered Star Ranch. But the murder of an influential scholar wasn’t on the program—someone has clearly taken the theme of Malice in the Mountains to heart. This shocking crime is only the beginning: other dangers and deceptions are soon revealed.

English professor Lila Maclean has a full agenda: she must convince a press to publish her book (possibly), ace her panel presentations (hopefully), and deal with her nemesis (regrettably). However, when Detective Lex Archer requests Lila’s academic expertise, she agrees to consult on the case. While her contributions earn high marks from her partner, it could be too late; the killer is already taking aim at the next subject. As Lila races to keep her colleagues alive, publish or perish takes on new meaning.

“A pure delight from page one. Cynthia Kuhn’s Lila Maclean mysteries will cure what ails you. Funny and fantastic.” — Becky Clark, author of the Mystery Writer’s Mysteries

“An intelligent, witty mystery that will keep you guessing to the very end.” — Libby Klein, Author of the Poppy McAllister Mysteries 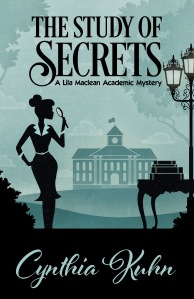 There could be nowhere more fitting for English professor Lila Maclean to spend her sabbatical than in a proper Victorian mansion. The whimsical Callahan House seems to have materialized from the pages of the mystery novels she is researching, with its enchanting towers, cozy nooks, and charming library. Unfortunately, it also features a body in the study.

Residents of Larkston have long believed that the Callahan family is cursed—the murder on the estate sets the town buzzing. Wild rumors are fueled by a gossipy blogger who delights in speculation, and further crimes only intensify the whispers and suspicions. A newly discovered manuscript, however, appears to expose startling facts beneath the fictions. When Lila steps in to sort the truth from the lies, it may cost her everything, as someone wants to make dead certain that their secrets stay hidden.

“Kuhn earns top marks with The Study of Secrets, her best academic mystery yet. Heroine Lila Maclean uncovers secrets both old and new, the most exciting revealed to her at the very end. Outstanding!” — Margaret Mizushima, author of the award-winning Timber Creek K-9 Mysteries 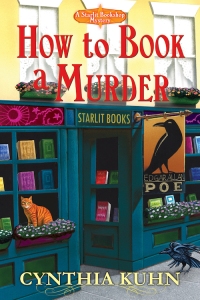 In a heartbeat, Emma and her aunt Nora, a famous mystery writer, become suspects. Emma is sure the party’s over for Starlit events, until celebrated author Calliope Nightfall, whose gothic sensibilities are intrigued by the circumstances, implores the bookseller to create a Poe-themed launch event for her latest tome. Throwing a bash to die for while searching for additional clues is already enough to drive Emma stark raven mad, but another shocking crime soon reveals that Silvercrest has not yet reached the final chapter of the puzzling case.

Someone in this charming artistic community has murder on the mind, and if Emma cannot outwit the killer, she and her beloved aunt will land behind bars, to walk free nevermore.

“Beautifully written and so full of love for books and their authors and readers” — Vicki Delany, national bestselling author of the Sherlock Holmes Bookshop mysteries

“With her trademark humor, engaging characters, twisty plotting, and literary references sure to charm mystery fans, she has created the bookstore we all want to browse in” –Laura DiSilverio, national best-selling and award-winning author of The Readaholics Book Club mysteries

“A gifted storyteller, Kuhn has created a delightful cast of quirky characters and a bookstore full of charm as a backdrop to an intriguing murder mystery.” — Kathy Aarons, national bestselling author of the Chocolate Covered Mysteries

“With its intelligent sleuth, bookish setting, and twisty plot, How to Book a Murder is a booklover’s dream come true!” — Mary Angela, author of the Happy Camper cozy mystery series and the Professor Prather academic mystery series

“Smart, suspenseful, and brimming with intrigue, Kuhn crafts the perfect page-turner in a town and bookshop so thoroughly crafted and real.” — Maggie Barbieri, author of the Murder 101 series 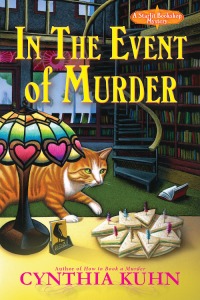 Nestled on the banks of a breathtaking Rocky Mountain river and dotted with delightful boutiques and galleries, Silvercrest, Colorado, is a book lover’s paradise. Bookseller and literary event planner Emma Starrs is looking forward to attending the annual Silvercrest Library Gala, a glamorous evening with celebrities including the legendary Whitney Willton, currently on the hit crime show Chasers, and her niece, party-planner-to-the-stars Lyra Willton. Gala Week is full of exciting activities honoring both page and screen, and library board president Tabitha Baxter is basking in the glow of her successful launch—until Lyra is found dead.

With the gala only days away, the board asks Emma for help, despite Tabitha—her longstanding nemesis—bristling over the choice. Emma agrees, even though she is already in charge of a classic mystery panel at her family’s bookstore, Starlit Books, which turns out to have its own challenges. Meanwhile, Whitney, who is aware of Emma’s sleuthing skills, begs her to find the killer. The case grows more complex with the disappearance of several priceless objects, an attack on one of the attending celebrities, and other predicaments.

Emma searches for clues while handling every unexpected twist and turn leading up to the extravagant affair. But when the guests step onto the red carpet, a killer still lurks in the shadows—and murder just might become the main event. 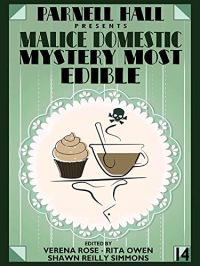 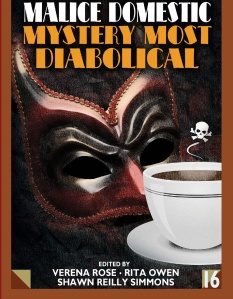 This study examines the associations between dressing and storytelling in Margaret Atwood’s fiction, focusing particularly on The Robber Bride and Alias Grace. 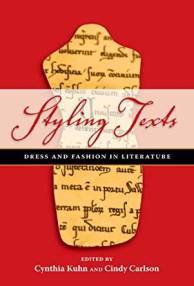 The essays collected here demonstrate how scholarly attention to literary fashioning can contribute to a deeper understanding of texts, their contexts, and their innovations. 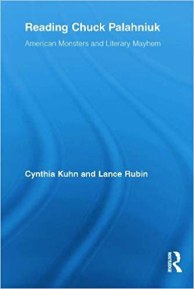 Reading Chuck Palahniuk examines how the author pushes through a variety of boundaries to shape fiction and to question American identity in powerful and important ways. 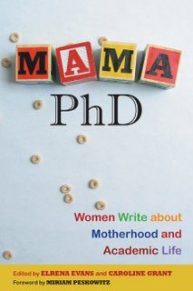 The thirty-five essays in this anthology speak to and offer support for any woman attempting to combine work and family.

Available in bookstores and online: