I READ: Crocodile on the Sandbank by Elizabeth Peters 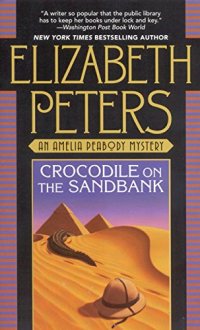 I stumbled on Elizabeth Peter’s Amelia Peabody series by randomly downloading titles from the Denver Public Library. These books have it all–intrigue, fine prose, romance, a rich historical setting, and, above all, hilarity. My husband and I giggled all the way through them.

The books are set in late 19th century Egypt and feature Peabody, an eccentric English Egyptologist, and her beast of a love interest, Dr. Emerson. The author herself was an Egyptologist so her world building is vivid and accurate. Crocodile on the Sandbank comes first in the series, but you can read the books out of order. I devoured these books before it ever occurred to me that I could write novels, and they were the strongest literary influence on my own mystery series. I highly recommend the audiobooks narrated by Barbara Rosenblat.

I WROTE: The Secret Life of Anna Blanc

It’s 1907 Los Angeles. Mischievous socialite Anna Blanc is the kind of young woman who devours purloined crime novels–but must disguise them behind covers of more lady-like reading. She could match wits with Sherlock Holmes, but in her world women are not allowed to hunt criminals.

Determined to break free of the era’s rigid social roles, Anna buys off the chaperone assigned by her domineering father and, using an alias, takes a job as a police matron with the Los Angeles Police Department. There she discovers a string of brothel murders, which the cops are unwilling to investigate. Seizing her one chance to solve a crime, she takes on the investigation herself.

Anna must choose–either hunt the villain and risk losing her father, fiancé, and wealth, or abandon her dream and leave the killer on the loose.

Jennifer Kincheloe is a research scientist and writer of historical mysteries. Her novels take place in 1900s Los Angeles among the police matrons of the LAPD and combine, mystery, history, humor, and romance. Her books have won or been finalists in multiple awards including the Lefty Awards, the Macavity Awards, the Colorado Author’s League Awards, the Amazon Breakthrough Novel Award for Mystery, the Mystery and Mayhem Awards, and the Colorado Gold. She lives in Denver Colorado with her husband and two kids. There she writes books and studies the jails.